Have you ever stopped to listen to the sounds in your home?  I mean really stopped — not just for a minute or two, but for an hour or two?  An hour or two when you focus on nothing else but listening to what your children say, how they interact, how they play, how they fight, etc.  I know as moms and dads to young children, it is nearly impossible for us to do this.  We are always right in the middle of the action – helping our children, watching out for their safety, abating their quarrels, playing imaginary games with them.  And if we’re not, we’re usually washing dishes, cooking dinner, cleaning up toys, making up beds – you know, doing all of that other stuff that has to get done at some point or another.

At 30 weeks pregnant this week, I had a tough time after my second glucose screening test (couldn’t keep the liquid down for more than 30 minutes the first time, so had to re-test).  The second test made me so sick that I vomited twice at the hospital – once at the thought of drinking the stuff, the second time just after my blood was drawn and while I was waiting to pay at the cashier’s desk – and then seven or eight times at home that afternoon and evening.  I felt awful.  But what this forced me to do — the silver lining, if you will — was to lay in bed and listen to what went on outside my bedroom door.  My husband (I thank God everyday for that amazing man) was able to come home early and play with the kids, feed them, bathe them, and get them ready for bed.  During this time, I heard so much laughter, some singing, a lot of great solo imaginary play, some fighting (mostly from Katelyn pulling Logan’s hair), some very insightful toddler observations, and some bubble-blowing in milk at dinner time (I know it’s not good manners, but it is so much fun!).  I realized just how much joy there is in our home, and I’m so thankful for it.

So on a day when you are down and out — or just down right sick and unable to get out of bed — tune in to the sounds of your home.  The love that family members have for one another is such a special thing, and something we should never take for granted. 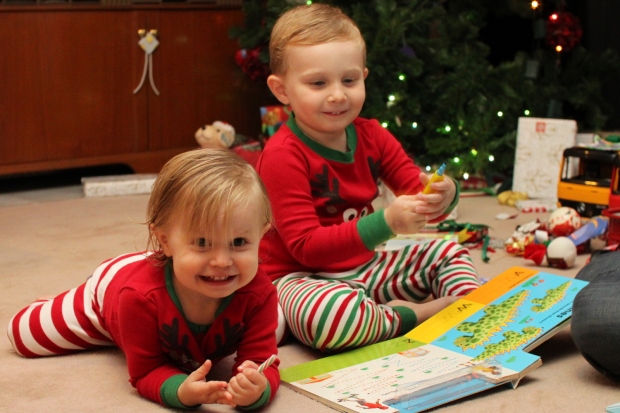 Lots of joy in the house this Christmas!

4 thoughts on “The Silver Lining”

Where In the World Have the Braunohlers Been?