To all of you moms out there who are about to try breastfeeding for the first time, remember not to be hard on yourself. It’s not easy for everyone. It doesn’t come naturally to everyone. It may or may not go smoothly. Just know that if it doesn’t go the way you want it to the first time, it doesn’t mean that it won’t go right the second time. Or the third or fourth time. 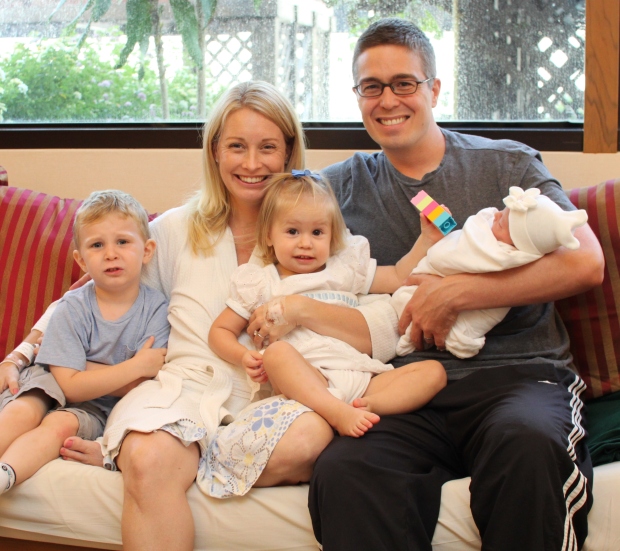 Five years ago, before our son was born, I made a commitment to breastfeed him. Very few of my friends had children at the time, so I knew very little about the process. I had never actually seen someone do it. So to prepare myself (as much as one can for that sort of thing), I read dozens of books and participated in a pre-natal breastfeeding seminar where we learned about positioning and a baby’s latch using stuffed dolls and boobs. It was a little awkward to be practicing for such a thing without an actual baby yet, but I wanted to put as much information in my knowledge bank as possible. I desperately wanted the process to go smoothly. After all, a mother feeding her baby is one of the most natural things in the world, right?

Unfortunately for me, it wasn’t simple. As prepared as I thought I was, breastfeeding my first child was extremely difficult. It took days for my milk to come in. The little guy was hungry and not gaining weight. The latch was a problem from the start. I got the cracking and the intense pain that comes along with an incorrect latch. Every time I would try to feed him, he would fall asleep. When he was awake, he was constantly hungry. I would constantly feed him, but it seemed like he was never getting enough. And the cycle continued. At the first week weigh-in, the Logan was only in the 9th percentile for weight and the pediatrician told me that I needed to supplement him for him to “thrive.” I started to supplement in small amounts, but I was determined to provide Logan a majority of what he needed through breastfeeding. Two and a half weeks in, I turned to a lactation consultant. The consultant spent an hour analyzing the way I held Logan to nurse him, the way he latched on, and teaching me techniques to keep him awake while I nursed. She weighed him before and after I nursed him. When it was clear that he wasn’t getting enough, she recommended a supplemental nursing system (SNS), which is a type of necklace that allows the baby to drink both the mother’s milk as well as a supplement simultaneously. The device requires you to tape tiny tubes carrying formula (or pumped breast milk) from the necklace to your nipples — not an exact science, but it works. She also recommended I rent a hospital-grade breast pump and pump every time after I nursed him. Finally, she told me that since he was two and half weeks old, my milk supply had more or less been established and that I might never have enough milk to solely breastfeed him.

I remember all of this like it was yesterday. And I remember feeling insufficient — every day for many, many months. I was riddled by guilt that I couldn’t provide the most basic element that a mother should be able to provide for her child – food. Wasn’t my body made to do this? Why was it so hard? Why couldn’t I feed my child? What was wrong? And what’s more was the judgement I faced from other mothers. One look at the bottle of formula and they assumed that I hadn’t chosen or even tried to breastfeed my child. That I was lazy. That I didn’t want what was best for my baby. That my child wouldn’t be as well off as their child. The number of times that I was reduced to tears, mostly from the stress I put on myself, but also from the silent pressure of others, was unhealthy.

For the first four months of Logan’s life, I had such conflicting emotions — overwhelming joy from holding this perfect baby boy in my arms, mixed with the frustration and guilt of not being able to provide him with what he needed. For nine long months I breastfed and supplemented him. I pumped every time after I breastfed him. It was challenging and time consuming. It was the definition of intense. By nine months, I was exhausted and defeated, so I chose to wean him fully. And when the process was over, I had never felt such relief.

Less than two years later, Katelyn, was born. I was even more nervous the second time than the first. Would I have enough milk? Would it come in sooner this time? Would I struggle again? Would it be easier since she was the second child and I knew what to expect? Questions abounded, but the one thing I focused on while in the hospital, was getting as much breastfeeding advice as often as possible. Nearly every time I would go to feed her, I’d call for the nurses to come in and help me do things the right way. Because we were in Thailand at the time, the nurses were amazingly helpful. I am so fortunate to have had their assistance.

I don’t remember having any pain feeding Katelyn and my milk had come in immediately — so I was feeling good about breastfeeding her. And then came her one month appointment when the pediatrician told me that she was not gaining as much weight as she should be. He said I could continue to breastfeed her for another month, but if after that she still had not averaged out, I would need supplement her. I left his office, beelined for the nursing room, and burst into tears. I thought I had done it right this time. It certainly felt right. Kate was nursing often but never seemed upset that she wasn’t getting enough. I had given my whole self to this process, literally. What more could I do?  Feelings of insufficiency haunted me. I asked myself how I could fail at this process yet again.

And then, by some godly miracle, Katelyn’s weight averaged out at the two-month mark. The pediatrician gave me the green light to continue exclusively breastfeeding her. I was elated. No, beyond elated. I’m not sure what had happened in that extra month — maybe I had figured it out, maybe she had figured it out, maybe we had both figured it out, but whatever it was, it was enough. And I wouldn’t have to worry about not being able to provide her with what she needed. Nor, (vain as it is) would I have to endure the judgement of the bottle. For the first time, I was able to relax and actually enjoy the process of breastfeeding. It was no longer a love-hate relationship. I became confident and it grew easier. So easy, that I waited until 13 months to wean her. And when I weaned her, it was bittersweet.

Two years later our second daughter, Ivy, was born. I had the same breastfeeding nervousness and fears, but they were tempered by my experience and the fact that on the second try, I had eventually succeeded. I still called the nurses on nearly every occasion I fed Ivy to make sure I was getting it right from the start. A week out of the hospital, I scheduled time with a lactation consultant, to double — no, triple — check that everything was as it should be. She laughed at me (in a good way) and told me that everything was more than fine. Ivy nursed well, slept well, and rarely cried. I had no physical pain. And all of her weigh-ins were successful. I was calm. This was working. And at 11 months, it’s still working.

So what made the difference in the end? Was I just nervous the first time around? Did I wait too long to get the help I needed? Did my body just not make enough milk from the start? You know what? I don’t know. Actually I have no idea. I could spend hours speculating why all of my experiences were different, but that’s not really the important part. The important part is that they were different. Just because exclusive breastfeeding didn’t work out the first time, didn’t mean that I wasn’t able to make it work the second (with some struggle) and third times. So hang in there. Be determined. Don’t beat yourself up if it doesn’t work exactly the way you want it to. It’s not necessarily an easy thing. And with every child, it is a unique experience.

Where In the World Have the Braunohlers Been?